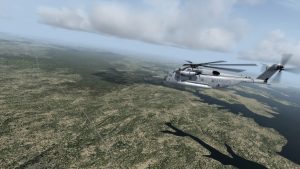 This is the first release to feature new helicopter capabilities, including scenario controllable artificial intelligence (AI) and autopilot functionality. Additionally, many developer requests were addressed, and we look forward to the Prepar3D ecosystem continuing to create high-end content that pushes simulation boundaries to new limits.

For developers, we have introduced the ability to add autogen grass on airport backgrounds, added interfaces to create custom voice commands, and refined our support for complex vehicle models. Multiple Scaleform panel samples are also included better showcasing some of the newer advanced panel features that available.

All of these enhancements are available now in Prepar3D v4.2!

The Prepar3D v4.2 update is available now and can be downloaded from the Downloads page. If you currently own a valid Prepar3D v4 license there is no charge to update to Prepar3D v4.2. To purchase Prepar3D v4, please visit our online Store.

Prepar3D offers separate updates for the Client, Content, and Scenery. This will make updating faster and easier than ever before. Please be sure to read the Prepar3D v4 Download and Installation Instructions for more details on how to quickly update to the v4.2 release. Please refer to the What’s New below to see what each installer contains. Most users will only want to use the Client installer to update.

You can find a full list of What’s New below.

The Prepar3D v4.2 Client update will require you to reactivate your product – with an internet connection it will be automatic.

New Features (Professional Plus Only)

Fixes and Improvements (Professional Plus Only)

The Lockheed Martin Prepar3D team loves hearing about your experiences with Prepar3D at our Forums. The forums also give us an opportunity to listen to your feedback as we continue Prepar3D development. We’ve partnered with our forum users and with several featured developers to continue to bring added features, enhancements, and optimizations all while enabling additional backwards compatibility, making bug fixes, and improving stability.

Thank you for your continued support for Prepar3D.

We hope you find that Prepar3D v4.2 continues to be the most immersive learning, simulation, and training platform available.

02-27-20
Prepar3D at FlightSimExpo in Las Vegas this June